Become a proud supporter of an Ambassador Animal today! By symbolically adopting a volunteer of our ambassador team, you will help feed and care for that animal for one entire year. You will also be supporting our mission to promote environmental conservation through public education and rehabilitation of Texas wildlife.

With each symbolic adoption, you will receive a 5"x7" animal photo, an adoption certificate, an animal biography, and a TWRC sticker.
**Please Note: The Adopt an Animal Program is a symbolic adoption and you do not get to take the animal home. Your sponsorship will help cover the cost of food, medication, and daily care.**

The stars of our Education Program, Iris, Pugsley, and JJ Watts are our signature Ambassador Animals. They venture to every outreach event and, between the three of them, have met thousands of people and helped spread awareness about their species and other Texas wildlife. 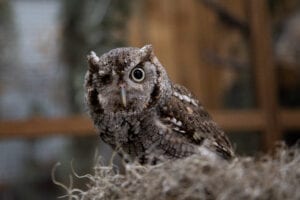 Like many of our ambassadors, Iris came to us as a baby. She was the size of two stacked cotton balls! She hatched from her egg with one eye that didn't fully develop. She was found on the ground and brought to the center by a kind rescuer. It is assumed that she was "evicted" from the nest by a parent or sibling due to her eye condition. Many owls can learn to hunt and survive with only one eye, but Iris bonded with people before she could learn to hunt on her own. With no fear of humans and no survival skills, she now resides at our Center and is our resident diva.

Lifespan: Up to 14 years in the wild, estimated up to 20 years in captivity.

Natural Defenses: Screech owls are dual camouflaged; they look like bark from above and light through leaves from below. They blend in to avoid predators.

Reproduction: Eastern Screech Owls typically lay one clutch per year. They lay 2-7 eggs, with the average being 4.

Fun Fact: These owls have a symbiotic relationship with some snakes! They bring live blind snakes to their nests to act as housekeepers, and the blind snakes eat the tiny insects that might otherwise infest the nest. 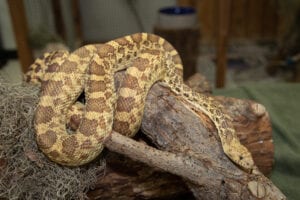 JJ Watts stays with us on permanent loan from one of our reptile rehabbers. He is an active volunteer of our ambassador family and regularly goes out to events in the community. Because of their large size, pattern, and behavior, bull snakes are often misidentified as rattlesnakes and pay for that resemblance with their lives. JJ helps us teach the public how to identify snakes and what to do when they find them. Along with Boss Hogg, our other resident snake, he has helped many people overcome their fears of these unique animals.

Natural Defenses: Bull snakes are large and can deliver a painful bite if threatened, but they only bite in self-defense and are not venomous. To deter predators, they will mimic the defensive posture and noises of rattlesnakes. They have specialized anatomy that amplifies and modifies their loud hiss to mimic the sound of a rattlesnake's tail. Like most snakes, they will also rattle their tails when they feel threatened.

Reproduction:  Bull snakes typically mate in the summer and can lay anywhere between 2 and 24 eggs.

Fun Fact: While their primary food source is small rodents, these snakes are exceptional hunters and will occasionally eat rattlesnakes. 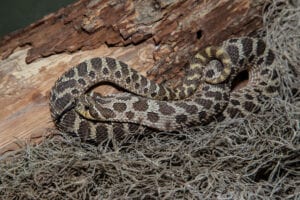 Boss Hogg was donated to us by the parents of a student who was unable to take him to college. Both Western and Eastern hognose snakes are native to Texas and are notable for their elaborate defensive displays, rear-fangs, and mild venom. Hognose snakes are effective predators os small mammals and amphibians, but their venom is classified as "medically insignificant" to humans. Boss Hogg helps us to bust many commonly-held myths about them and to overcome fears. Many harmless snakes die needlessly because of these fears, hognose snakes among them.

Lifespan: Wild life span is unknown, can live over 20 years in captivity

Natural Defenses: Hognose snakes will hiss loudly and flare out their head and neck when they believe their lives are threatened. This behavior often leads people to wonder if we have cobras in Texas! If this fails, they will roll over on their backs, stick out their tongue, and emit a foul scent to appear dead. These snakes may strike or lunge, but they are not aggressive and do not bite unless excessively provoked.

Fun Facts: Hognose snakes are rear-fanged. they produce a weak venom in specialized glands that flow through a groove on the surface of their fangs. They are fully capable of opening wide enough to bite humans, but their venom delivery is slow and generally does not cause medically-significant symptoms. 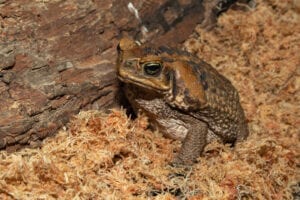 Jaba is a Cane toad, or marine toad (Rhinella marina)

Our cane toad helps us teach about invasive species and the importance of leaving wildlife in their native habitats.

The cane toad is best known as a destructive invasive species in Australia. However, this species of toad is actually native to the southernmost tip of Texas. In their natural habitat, these hearty toads help control the populations of numerous common pest species. Unfortunately, they are so good at controlling the pests where they live that people intentionally released them in Puerto Rico, Florida, Louisiana, Hawaii, the Philippines, Fiji, New Guinea, and many of the Caribbean islands, and Australia. They are the most-introduced of any amphibian species! Unfortunately, in many of these places, the toads have become a destructive invasive species. They are very hardy and most animals who have not evolved alongside them lack any immunity to their potent bufotoxin.

Even as one of the most-reviled amphibians in the world, the cane toad has an important role in its natural habitat, like so many other amphibians. Unfortunately, amphibians are quickly disappearing all around the world.  Approximately one-third of all species are now threatened, endangered, or extinct.  Habitat loss is the primary cause.  Even here, the Houston Toad is currently facing possible extinction with an estimated 300 remaining in the wild.

Natural Defenses:  The eggs, tadpoles and adult frogs produce a powerful poison known as bufotoxin. In adult toads, the poison is produced and secreted from large parotid glands on their heads. This poison is fatal to most predators, but there are no confirmed human deaths from cane toads.

Reproduction:  Female cane toads reproduce up to twice annually and one toad can lay up to 30,000 eggs. Because of this, killing adult toads is an ineffective means of population control.

Fun Fact:  Fossils from the late Miocene were found in Columbia that are indistinguishable from current day cane toads! 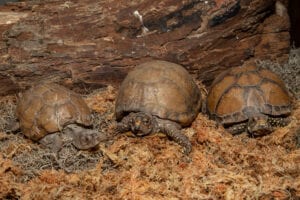 All three of our box turtles came to us with metabolic bone disease (MBD), a condition that results from poor nutrition or insufficient lighting and heating. While box turtles are native here in Texas, all of our turtles were kept in captivity.  Left untreated, MBD can result in soft, deformed shells, muscle weakness, bone fractures, organ damage, and even death. Each of our turtles require very specific diets and do not know how to forage for their own food.

Lifespan:  50 years or more both in the wild and in captivity

Natural Defenses:  Box turtles earned their name by having the unique ability to completely close the front and back of their shells. These tortoises have hinges on their plastron, the lower half of their shell, that allow them to accomplish that.

Reproduction:  Three-toed box turtles mate during the spring, but a female box turtle can lay viable eggs for up to 4 years after mating. In the summer, the mother turtle will find a good place to hide her eggs and will typically lay 3-5 eggs.

Fun Fact:  Turtle’s shells are made of bone covered in a thin layer of skin and then a layer of keratin, the same protein that makes fingernails. They have sensation in their shells! 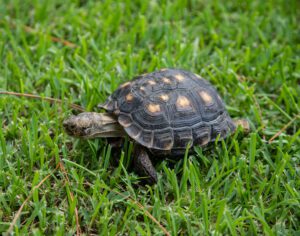 Our Texas tortoise was found wandering a neighborhood in Clear Lake and was brought to our reptile rehabber. This is far outside of her native range, so it’s possible she was an illegally-kept pet who escaped or was released. Due to their susceptibility to disease, it’s illegal to release Texas tortoises into the wild, so she found a permanent home with the education program.

Lifespan: Can live up to 60 years!

Natural Defenses:  Tortoises are protected by a bony shell that is covered in a layer of keratin. Unlike box turtles, they cannot close their shells to entirely hide their head and limbs. When harassed, they may empty their bladder in attempt to ward off a potential predator. In an arid habitat, this can dangerously deplete their water supply and leave them vulnerable to dehydration.

Reproduction: Texas tortoises do not reach breeding age until around 15 years old. Their reproduction rate is also very low. Females lay only 1-2 clutches per year, averaging about 3 eggs each.

Fun Facts: These are the only tortoises native to Texas, and they are listed as a threatened species here. This is due to habitat loss, road fatalities, disease, and poaching for the pet trade. State protection means it is illegal to keep, harm, or harass them.

This one-time purchase will support any ambassador animal for a lifetime, covering the high cost of food, medication, as well as their daily care. With a lifetime adoption, you will also fund the engraving of one gold Friends of the Forest leaf, which will be featured on one of our tribute trees in our center lobby. 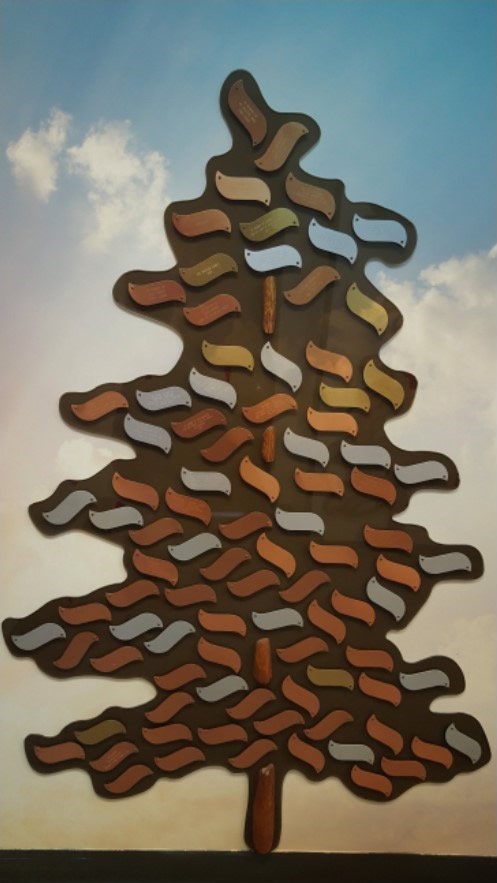 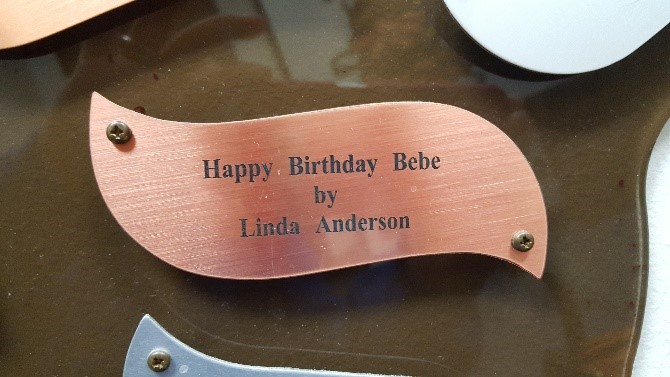 Please Note: The Adopt an Animal Program is a symbolic adoption and you do not get to take the animal home. Your sponsorship will help cover the cost of food, medication, and daily care.