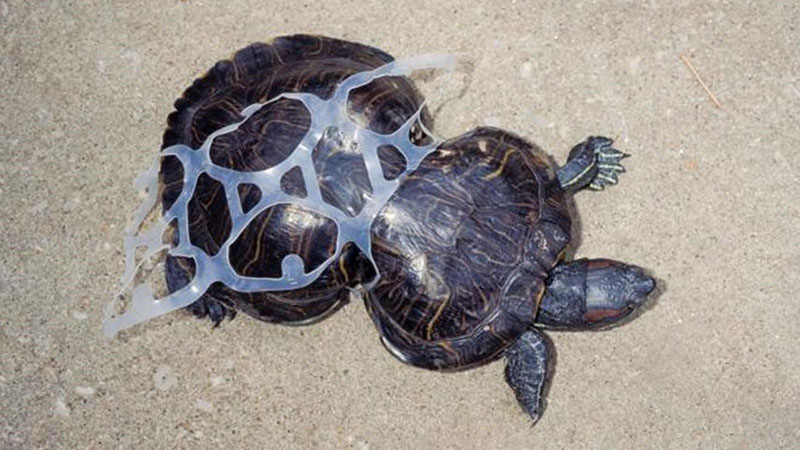 I’m deviating from my usual articles about local wildlife and addressing an issue that should be important to all of us. It’s the plastic pollution of our oceans. Why should we be concerned?  Plastic is killing our wildlife. Fish, seabirds, seals, sea turtles and marine mammals ingest plastics causing suffocation, drowning or starvation or they become entangled in it.

Plastic was invented in 1907 and was considered a major breakthrough. Although not widely used in the beginning, now it’s everywhere we look.  After all, it’s durable and lightweight, but it’s deadly to marine animals.  Are you old enough to remember when milk was delivered in glass bottles?  Remember when sodas were only available in glass bottles? Remember paper straws? Today when you order a drink in a restaurant, you get a plastic straw. Do you remember the introduction of plastic bags in grocery stores? Groceries were once put in paper bags, then we were asked if we wanted paper or plastic and now it’s plastic only. Grocery stores have row after row of products in plastic containers replacing what were once glass.

It is estimated that 92,000 tons of plastic end up in our oceans every week. To help you understand how much that is, it’s 184,000,000 pounds! But where does all that trash come from? One would think that it’s coming from ships throwing their trash overboard. That accounts for only 20% of the problem. The other 80% comes from land-based activities. Ninety percent of all plastic trash that ends up in the oceans gets there by ten rivers that carry it there (none are in the United States). All of these rivers run through densely populated areas that don’t have adequate waste collection or recycling programs. Additionally, there’s very little public awareness that plastic is even a problem in these areas. Trash being blown away from landfills is also a problem. Plastic is lightweight so it doesn’t take much for the wind to blow it around. The trash collects around storm drains and ends up in our oceans. And then there’s the general public that still thinks it’s okay to throw trash out of cars or wherever they feel like disposing of it.

There are several garbage patches floating in our oceans. Rotating ocean currents called “gyres” creates them and currently there are five of them in the ocean. One of them is called the Great Pacific Garbage Patch and is located in the North Pacific Gyre between Hawaii and California. It is the world’s largest collection of floating trash. The debris is spread across the surface of the water and goes all the way to the ocean floor. The latest estimate puts the size of this patch at twice the size of Texas! Eight percent of the debris is made up of plastic bags, bottles and other consumer products.

So what can be done about the problem? Obviously, there are many situations that we have no control over but we can do our part. We can be responsible stewards of our environment and we can teach others to be as well. Here’s how you can help:

TWRC Wildlife Center is a 501(c)(3) organization in Houston. Since 1979, TWRC Wildlife Center has been committed to providing quality emergency care and rehabilitation for injured, ill and orphaned wildlife brought to us by the public. Through education, and engaging the public in wildlife-care programs, TWRC is making a difference for urban wildlife threatened by loss of habitat.