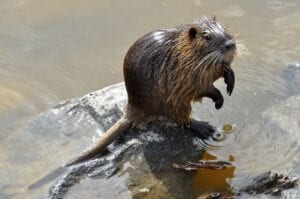 Simply stated, an invasive species is a non-native plant, animal or insect that is non-native and can cause economic or environmental harm or harm to human health.

There is one invasive animal that is often mistaken for a beaver or otter and it’s called a nutria. They were brought to the United States from South America for their fur and were kept on fur farms. Some escaped and in the 1940’s many were released into the wild when the fur market collapsed. Nutria are now considered one of the most ecologically harmful species on the planet. They can be found in 40 states and all areas of Texas except for the Panhandle and extreme west Texas.

Nutria are large rodents weighing up to 20 pounds but are smaller than beavers which can weigh up to 50 pounds. They have orange teeth, are semi-aquatic and multiply very rapidly having up to 3 litters every year. They have partially webbed hind feet to aid in swimming. Their eyes, ears and nostrils sit high on their heads so they are able to keep their heads above the waterline. They have valves on their mouths and nostrils that seal out the water when they are submerged. Nutria have a rat-like tail while beavers have broad flat tails. One sure way to distinguish a nutria from a beaver or otter are the whiskers. Nutria have white whiskers while beavers and otters have black whiskers.

So why are they considered invasive? Nutria live in burrows that are connected by tunnels that are dug near rivers, canals and lakes causing erosion and flooding. They eat native wetland plants and will eat the entire plant—roots and all. Because the roots are eaten, the plants will not grow back. Additionally, with the root system gone, the soil is destabilized which causes erosion. In addition to wetland plants, nutria eat many agricultural plants like rice, corn, wheat, sugar, peanuts and more. They may even dine on your vegetable garden or newly planted grass.

Because of their burrowing behavior, flood-control and water-retaining levees are damaged. They also burrow into the flotation supports under boat docks, under building foundations, roads, streams, and dams. The damage weakens the structures and can cause them to lean, sink or even collapse.

Not only are nutria bad for our environment, nutria are host to many diseases and parasites including tuberculosis, septicemia, tapeworm, liver flukes, and nematodes. According to the Fish and Wildlife Service, it can be a real health hazard for domestic animals, livestock and people to drink or swim in water that is contaminated with nutria feces and urine.

For information on controlling nutria, contact the nearest office of TexasAgriLife Extension-Wildlife Services.