Ducklings:  commonly black and yellow, occasionally solid yellow, black, gray or brown, or a combination of the above colors.  Often, depending on duckling’s face color, one can observe a  thin  “mascara” line starting at the outer part of each eye.

Adults:  The male is much larger than the female,  and both display red fleshy skin and caruncles (bumps, or wattles) on the face area.  Unique to the male, the caruncles are much more prominent, much larger, and can develop on the back of his neck.

Muscovy ducks originated in Central & South America, and Belize.  They eventually migrated north, and can now be found in all 50 states in the USA.  On March 31st, 2010, US Fish and Wildlife passed a ruling that deemed Muscovies an invasive species in the US, with the exception of 3 southernmost counties in Texas (Hidalgo, Starr, & Zapata), where they are still considered native.  In their original native habitat, Muscovies nested high in trees or in tree cavities.  In the US, we still see an occasional female Muscovy nesting high atop a house or building, but they have also acclimated to nesting on the ground.

Although Muscovy ducks are capable of flight, they generally congregate and remain  at our local ponds for life, and co-mingle with our domestic ducks. Unlike our domestics, Muscovies breed all year long, and the females are excellent mothers.  After an incubation period of 30 days, they generally have 14 ducklings hatch per nest.  The young mature in 3 months.  Thus, their major threat to our environment is the extreme overpopulation .  Because of their flight-worthiness, capture is somewhat difficult, and relocation of the captured is highly restricted by USF&W guidelines  Many Houston-area subdivisions have unfortunately had to spend many thousands of dollars to hire a pest control company to remove the Muscovy ducks in an attempt to manage the uncontrollable numbers.  Best advice:  If possible, try to actively control the explosion in population by regularly picking up & disposing of the eggs from the nests; thus you might avoid the inevitable cost and heartbreak of the eventual need by governing entities to remove all of your beloved ducks. 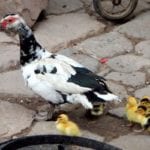 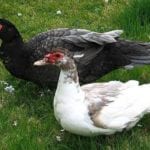 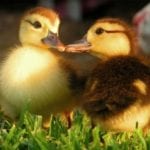