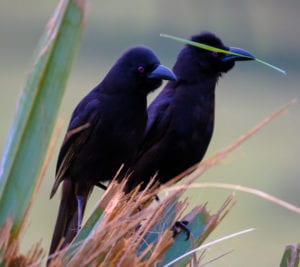 We’ve all been in parking lots where we feel we’re being stalked by big black birds just waiting for us to drop a morsel of food. What are they? Ravens, Crows, Grackles? If you said Grackles, you’d be correct.

So how do you tell the difference? Ravens are very large and have a long wedge-shaped tail. They have a thick bill. Their throat looks a little shaggy if you’re ever able to get close to one. Their call is deep. Crows are about the size of a chicken. They have smaller beaks and shorter tails that are squared off at the ends. They have a higher-pitched call than Ravens. Grackles are about the size of Robins. They are easily identifiable by their iridescent feathers mostly seen on their heads. They have golden eyes and their call has been compared to the sound of a rusty gate.

Grackles are not picky eaters. They’ll eat bugs, berries, seeds and just about anything else they can find. They’ll wade in water in search of small fish and will even eat leeches off of the legs of turtles. They steal worms from robins, raid the nests of other birds and will even kill and eat other birds. Of course, we all know that they love French fries, cookies and anything else that is dropped in a parking lot or in a trash bin.

Grackles practice a strange behavior known as anting. This involves rubbing ants on their bodies. No one knows exactly why they do this but some scientists believe the ants secrete an acid that kills feather mites. Others believe it has something to do with shedding feathers or molting.

Just like their eating habits, grackles are not very particular when it comes to where they build their nests. Some live and nest in colonies as large as 200 breeding pairs. A female can lay from 4 to 7 eggs in a single season.

Right now, we’re in baby bird season. Some birds that are brought to us for care should have been left where they were. If you find a baby bird, please give us a call and let us help you determine if the bird needs help or not: 713.468.8972